The Spider-verse: What it means to be part of the cosplay community 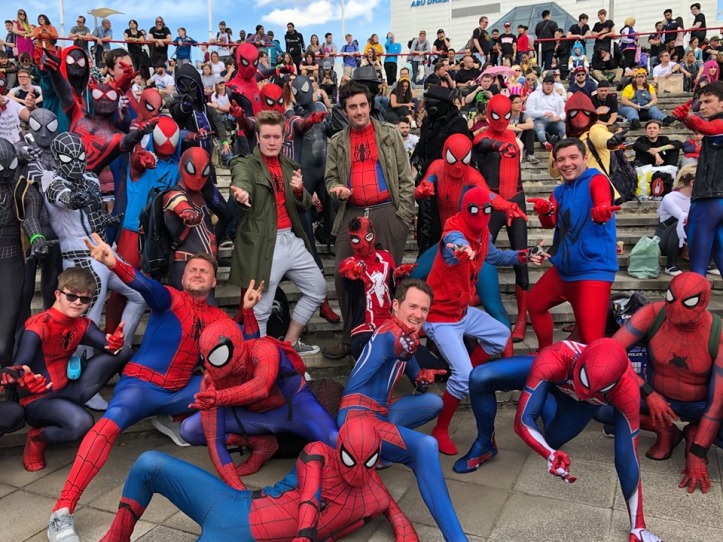 As kids we all aspired to be a superhero or we had a superhero we looked up to, someone who made us feel safe during the bad times, some people envisioned their Dads as Superman or Batman and their Mum’s as Wonder Woman, these people that could do so much but never seemed to break a sweat and seemed almost invincible to you.

Growing up, you find more appreciation for the costumes, you find a deeper understanding and connection to a specific character or set of characters, you end up putting yourself into this fictional world that not only makes you feel safe but makes you feel whole. In an interview with Kevin Smith, Stan Lee once said that “that’s the great thing about Spiderman, it’s the reason I created him, because once he put that mask on he could be anyone, he could be White, Black, Hispanic, Asian it doesn’t matter, you could be him and go through all those stories together, that’s why I wrote him how I did, I wanted a character people could connect to so I made the most down to earth hero that I could.”

But what does this mean for the Cosplay community?

In recent media such as The Big Bang Theory you hear about conventions such as San Diego Comic Con, a place where people can meet, enjoy nerd pop culture and most of all… COSPLAY!

When attending my first comic con, I noticed that people were coming together in their grouped cosplays, whether you were dressed as a Marvel, DC, Anime or Gaming character or even celebrities not from nerd pop culture, it didn’t matter you were accepted, you’d take photos together, you’d blend in and create this group dynamic that you wouldn’t have in your everyday life. Now while at first, I wasn’t very body confident and wasn’t up for cosplaying characters I truly wanted to, people I met at the convention helped build my confidence, they helped me find a way to dress as who I wanted to dress as and not feel stared at or overwhelmed. That’s when my first true cosplay fell into place, with my love of all things Spider-Man I decided to cosplay Scarlet Spider and find out what the cosplay community was, changed my life forever.

I saw a whole new part of cosplay, I saw a level of creativity even more intense than the costumes themselves, the photo and video shoots that were planned months ahead of time or sometimes on the spot, to show the character in situations from the comics or in dream situations, the possibilities were endless. And when I got to talk to members of what’s referred to as the Spider community, I met people who made me feel not only involved, but like I belonged. Since then I’ve attended every Spider-Verse meet up since.

But cosplay isn’t all sunshine and rainbows per say, there is a darker side to the community, or more so situations that negatively affect the cosplay community. Much like the Me Too and Times Up movement in recent years, the cosplay community has had its own controversy, one that I have personally been affected by. In 2014, the cosplay community coined the phrase: Cosplay is not Consent. Now while some of you may never have heard this phrase, I can assure you, after reading this you will never forget it.

During my first attendance to MCM dressed as Scarlet Spider, people were coming up to me, asking for photos and complimenting my costume. I felt like a Rockstar and was more than happy to oblige… that was until one situation happened, during a photo shoot with another Spider cosplayer I was having the time of my life, until someone came up behind me and grabbed me, at first I thought it was a friend that I was with having a joke, but no, a con attendee was full on grabbing me and running off, he would then follow myself and other cosplayers around the convention hall and continue to do the same thing, it caused me to feel so insecure that I was ready to leave the convention, I had to have a friend stand behind me at all times just so I felt like it wouldn’t happen again.

It scared and scarred me, for a while I was unsure of putting the costume back on and though the person was found out and banned from MCM for sexual assault, it’s a situation that happens all too often. Some people feel that just because you’re in a skin tight suit, or a cosplay that shows off some part of your body which they can sexualise, that it’s okay to grab, ogle or do poses that you would never do in everyday life and the unfortunate situation is, because you don’t know who the person is, because they run off, because the conventions are so large, most of the time it goes undealt with, no matter how much you report it, no matter how far you take it. This happens much too often to male and female cosplayers alike, when attending conventions yes fair enough the costume may make the person feel sexy and attractive, a feeling which possibly they don’t have on the day to day, but it does not give anyone the right to lay their hands on you, it wouldn’t be done in everyday life so why do it at an event where everyone is supposed to be enjoying themselves and feeling safe.

During my time as a cosplayer, I’ve met some incredible people who’ve had situations at conventions themselves or who’ve had opinions on the community that I felt needed to be heard so I wanted to bring those opinions forward to all of you.

‘Really, cosplay means a lot to me, but at the same time the community can be vicious and cruel in some places and wonderful and kind in others. Cosplay in a sense is a release for me, there’s nothing I love more than pouring my soul into a new project and getting behind my sewing machine, but the toxicity of the community sometimes makes me wish I wasn’t a part of it, it’s stressful and people within it can be cruel to no end. I’d define the community itself as cruel, harsh, wonderful and brilliant all at once, because it can be those things all at once’ – Ellena Ezreal Camp

‘People struggle with belonging. With mental health issues and feel that they aren’t connected to a certain kind of group. You don’t have to, but the cosplay community is filled with so many misfits and outcasts that all feel the same way that they end up belonging together. I met some of my best friends through cosplay and that was because of the characters that we had mutual interest in. It’s hard to find someone who likes all of the same things as you, but when you see someone dressed up as your favourite character from a film or niche comic, you instantly have that connection. The love of the character’– Logan Wolfe

‘To me this community is all about bringing people together no matter who you are, whether if you’re a social outcast, or shy, or have no friends, or just different, there’s people in this community that will get you and just like you for you. Everyone is unified by the one thing they have in common, whether your cosplay is handmade or bought, or comic related, or anime related. It brings people together cause they all love the same thing in one single way, plus it’s pretty awesome’ – Harry Mustafa

‘If I’m honest my personal experience in the cosplay community has not been massively supportive. It seems like everyone I’ve interacted with or seen interact with each other prefers to split their time between bragging about their cosplays and putting down other people’s. It’s been quite sad to watch and is why I just stick with my friends when I go to cons instead of talking to groups of people. However, when there is a sense of supportiveness they can be a lovely bunch – I’ve just not seen that much’ – James Hameed

‘It’s a second family, inclusive and something that connects you to likeminded people, I’ve met so many close friends through cosplay and it’s just all-round good fun. Plus, I don’t have to pretend to be an adult when I can be someone else! Some people use it as a form of escape from day to day life to be another person for a day’ – Shannon Jade

‘I, like many others in the cosplay community, suffer with poor mental health. I’ve met countless others who do. It is a correct stereotype, but not 100% of the community are as such. This however does not mean I am unkind, rude or inappropriate to others I meet within the community. Sadly though, many others find excuses to do so. The cosplay community in itself is not a bad group, it just has bad individuals. And as long as I have my close friends with me during these events, where I can share a night in the hotel room, with pizza and a few ciders. Making and wearing costumes to characters I love embodying, there isn’t another community I’d rather be a part of’ – Chazz Greenwood

So in the end, how would I define the cosplay community, I’d say overall the cosplay community is like a family, when you find the right group you finally feel as though you belong, but much like every family, there’s always one bad apple that tries to ruin the bunch and though some people attempt to make conventions feel unsafe and take things too far, for the majority cosplay is a safe haven, it’s a group of like-minded individuals who want to give something back to the community and creators that helped them be who they want to be. I probably wouldn’t be where I am in my life without the cosplay community and I know many feel the same, so it’s easy to throw around words like nerd and geek, but take a second to try it, give yourself that experience and find that camaraderie, take yourself out of your day to day life and just jump into a little bit of fantasy.

The Crow’s Nest is a Greenwich Students’ Union Student Media channel. The views expressed in this website do not necessarily reflect those of GSU, its trustees, employees, officers or the University of Greenwich.