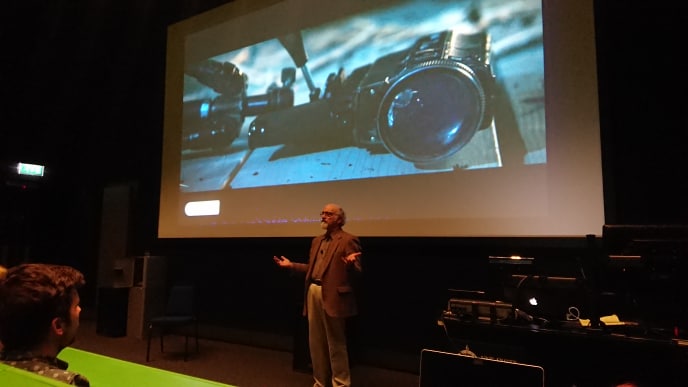 On 1st April 2019, the University of Greenwich film department was visited by Mark Ulano, the Multi Award Winning Production Sound Designer for films such as Titanic, Kill Bill and Iron Man to name but a few.

Mark hosted a lecture based on his position as a Sound Designer, what he had to do to be the Sound Designer he is today and what Sound Design truly means in the world of film.

When discussing the production process, he states that he starts where most other members of the industry usually start, when offered a job for a film he sits with the script. Now while some will read the script in their own time, Mark does not believe in that, he locks himself away from his family, friends and pets and makes sure that he read the script in one sitting. When reading the script he refuses to take an analytical/technical approach to it, but instead takes an objective approach to it.

He reads it as if it were a novel or something, to find if his attention has been caught, once he has read it and it has his attention, he contacts the director to have a sit down with them and then starts finding out what he needs to do. With this, he discusses a meeting with James Cameron: “During a meeting with Jim to discuss beginning work on Titanic, he said something to me which has stuck with me to this day – Don’t give me what I ask for, give me what I need!” He then asked the audience to think about it for a minute, what could be meant by that statement.

This led me to think about it and how, in a creative industry it’s fine attempting to do EXACTLY what a Director asks of you, or what the person in charge asks of you… BUT ARE YOU standing out to anyone? What impact are you making and what special thing are you doing to make this work yours?

During the time Mark gave the audience to think, he stated that “To this day I still have not figured out a specific answer to this, but I’ve found several way’s I think it could be answered, which led me to find MY TAKE on production sound” this shows that when being a filmmaker or someone in a creative industry, you should take the initiative to be different, take a stance that will make you memorable and be more likely to be hired.

He also discussed the importance of listening to even the smallest detail of what is said in the meeting with the Director. In one instance, he spoke about having worked on a Bruce Willis film, which he wasn’t allowed to name, but that said he discussed something, that allowed for the Director to know how thorough he was. “During my meeting with the Director for this project, we were coming to the end of our lunch and he made a statement which threw me off – Bruce is gonna call for a ‘SOUND PERSON’ while on set… ignore him, you and your crew ALL IGNORE HIM; I didn’t understand why but he wouldn’t say anything else. So I turned up to the set the next day and as I was told, half way through the shoot, Bruce called for sound, we all ignored him, no one went over and no one replied, after the break I finally went over and adjusted his microphone and he winked at me. It was then that I realised I was being tested, my team were being tested to know that we took direction and were being thorough and listened to the smallest detail.” Before hearing this, I never realised how important sliding small details into a conversation could be, it helped me understand that I need to do so to be able to know are people listening, are people truly respecting what I’m saying and will they do what I need them to, especially in such a professional environment.

I then had the opportunity to ask a question myself, which gave me an incredible insight into creating the disbelief in film through sound. I asked – “You worked on Iron Man 1 & 2 which much like Super 8 are films in the Sci Fi genre but unlike Super 8 is a film in the Superhero genre, which features more disbelief and sounds that would not normally be as prominent in our world like the armour being put together and taken apart? Could you discuss what it was like to create those sounds?” and Mark answered in a way I didn’t expect, instead of directly answering the question, he discussed the difference between John Favreau’s vision and the visions of James Cameron, Quentin Tarantino and JJ Abrams but to name a few, he said “You will never experience four more drastic differences when trying to create a film, you will never experience four more opposing ideas for what they want for sound, but that’s what I respected because each of them have their own approach, this allowed me to show them how I would then deliver what they need to them and make my impact, which has allowed me to work with them again.”

In the end, hearing all of this from someone who has had so many years in the industry gave me a new perspective on all creative professions I am involved in, hearing such inspiring insights I couldn’t go without letting others know his input on the industry and I hope you all enjoy hearing what he had to say.

If there’s a topic you’d like us to cover, or an issue that you think needs more awareness, let us know at thecrowsnestgre@gmail.com.

The Crow’s Nest is a Greenwich Students’ Union Student Media channel. The views expressed in this website do not necessarily reflect those of GSU, its trustees, employees, officers or the University of Greenwich.

Digital Film Production Student at University of Greenwich, Event Host - Bar Latitude, Bar Man - Sparrows, Vocal Coach, Trainee Teacher. I'm a driven person with a passion for Music, Drama and Film, having been the focus of my studies for the past 10 years. I push myself to further my knowledge in subjects I'm passionate about or a subject that I get involved in. I am willing to take on new challenges and I am a strong team player, having worked in positions strongly focused around working as a team. View all posts by Tommy Monkhouse